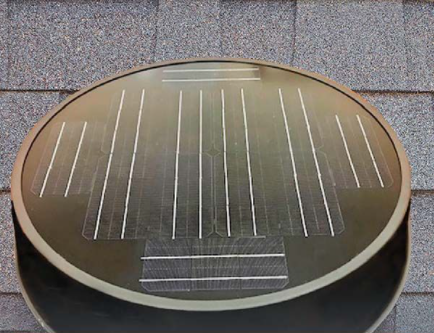 If you have an upstairs bonus room or bedroom that gets uncomfortably hot in summer, consider adding a solar powered fan to your attic. Solar or PV fans run on sun power and pull superheated air out of your attic to be replaced by cooler outside air. This reduces the amount of work your HVAC system has to do to cool your upstairs living area.

You can install PV fans yourself if you have good carpentry skills, but it's not necessarily an easy job. "You have to cut holes in your roof, so you need to make sure you aren't cutting into anything important," says Danny.

You should also have some experience installing flashing to keep moisture out; if you live in a storm-prone area that regularly experiences driving rain, think twice about installing at all.

The effectiveness and safety of attic fans is a debated subject, but studies show that standard line-powered fans actually cost more to operate than they generate in savings. And they can create zones of negative pressure, which risks pulling conditioned air from the house into the attic and the dangerous possibility of pulling gases from combustion appliances back into the house — namely, carbon monoxide.

Since solar-powered fans don't draw nearly as much air as line-powered fans, neither of those concerns comes into play. Plus, a PV fan doesn't cost anything to operate once it's in place.

Energy Star-rated solar attic fans still qualify for a federal tax credit of 30 percent of your purchase and installation costs. A single fan typically costs $300 to $600 plus an extra $100 to $150 each for installation. "But you'll likely need two fans to make an impact," says Danny. "Possibly three if your house has more than 1,600 square feet of air-conditioned floor area."

Danny's tests of solar attic fans showed that in Florida, where there's abundant solar energy, yearly savings from installing two fans in a house with just over 1,000 square feet of air-conditioned floor area amounted to only 460 kWh. Depending on what your utility charges, that's about $40 per year. Even if you install it yourself and take the tax credit, it could still take you 15 years or more to recoup your investment.

"It's really more about comfort," says Danny. "Solar powered fans can make a real difference if you regularly use the space adjacent to your attic. I also use a gable-end fan above my garage that makes the space noticeably cooler."

If your primary motivation is saving money on your utility bill, you're likely better off choosing a different attic-related project: installing a radiant barrier, upgrading to R-38 insulation if you don't have it or even switching to a white roof in a cooling-dominated climate.